Fewer than ten UK choral societies can trace their roots back more than 175 years and boast a continuous performing history of choral music. Founded in 1839 at the beginning of Queen Victoria's reign, Guildford Choral Society is one of the longest established community choirs in England.

The driving force in setting up the choir was the conductor, Frederick Lemare, born in London in 1799 into a family of Hugenot silk weavers. After he moved to Godalming in 1829, he became a leading figure on the Surrey music scene and, over subsequent years, sought to develop community choral singing. 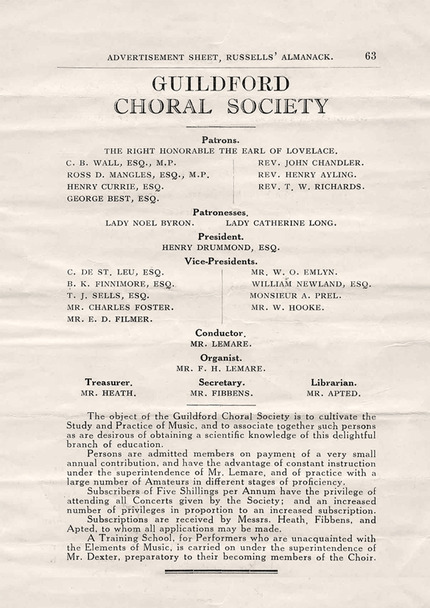 In 1842, a recruitment advertisement for the ‘Guildford Choral Society’ was placed in Russells Almanack, to attract both singing members “on payment of a very small annual contribution” and subscribers, who for “Five Shillings per Annum” could attend all concerts given by the Society. 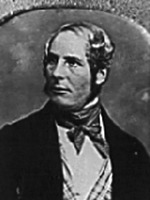 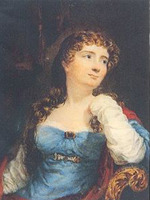 With the backing of a number of prominent patrons – including The Earl of Lovelace, Lady Noel Byron (wife of the poet, Lord Byron, whose only daughter, Ada, was the wife of the Earl, and who, as a gifted mathematician, is credited with the earliest form of ‘computer’ programming) – the Society prospered.

Frederick Lemare died in December 1866, leaving behind the legacy of the choir we see today – a history that has encompassed performances of many of the great choral works with leading contemporary orchestras, conductors and soloists.

At a concert in honour of Her Majesty the Queen’s Golden Jubilee at the Royal Festival Hall in June 2002, Guildford Choral performed Carl Orff’s Carmina Burana and Walton’s Coronation Te Deum with the BBC Concert Orchestra and the City of London Choir. 2005 again saw Guildford Choral in a sell-out performance of the Mozart Requiem in the Royal Festival Hall with the Royal Philharmonic Orchestra – with whom the Choir has a long-standing relationship.

The Choir frequently performs in Guildford Cathedral and other local venues, and in December 2011, supported by the Guildford Philharmonic Orchestra, Guildford Choral was the first choir to sing in Guildford’s new concert hall, G Live.

You can find more information on the Choir’s activities, dating back to 1965, on the Past performances page.

Guildford Choral also has a substantial discography and copies of our recordings are available to buy from Amazon.